Florida concentrates some of the most important nesting beaches for loggerhead turtles worldwide. In August 2014 our programme brought together policy makers, researchers, fishermen, comunicators and educators of both sides of the Atlantic to strengthen international cooperation.

SEA TURTLES AND FISHERMEN CROSS THE ATLANTIC TO FLORIDA

Since 2005, a collaborative, multiyear project has been underway in the Southwest Mediterranean Sea to investigate methods to reduce the incidental capture of sea turtles in longline fishing gear. The joint effort between this international team of researchers from the US (NOAA NMFS) and Spain (KAI Marine - Alnitak) , and fishermen started showing spectacular results in 2008 when a change in baiting of hooks and soaking of hooks at 80 fathoms reduced bycatch rate by over 95% in the fishery targeting swordfish.  This fishing fleet composed of nearly 100 boats has been collaborating with researchers and environmentalist since the early 80’s when the bycatch problem was detected with estimates of up 30.000 loggerhead turtles per year. Practically all the turtles caught by this fishery where of the North East Atlantic nesting grounds.

Building from this success story Alnitak and KAI Marine, with the help of USFWS, and under the framework of the Marine Turtle Conservation Act, has since 2010 initiated a program for the capacity development of the entire Spanish longlining fleet, including some 150 long-distance vessels. This capacity building is carried out at two levels. Firstly in port at annual workshops where fishermen and scientists discuss progress made in their fishery in bycatch mitigation, handling and release of sea turtles and electronic reporting of bycatch. Secondly, scientists of KAI work at sea directly on board the fishing vessels, monitoring the implementation of measures and actively involving fishermen in the development and testing of new measures.

This July, Kai Marine scientists and a group of Spanish fishermen and teachers, will join US government scientists on a trip to Florida to see nesting loggerheads and hatchling loggerhead turtles emerge from nests, and meet some of the people and institutions dedicated to the research and conservation of sea turtles on U.S. nesting beaches and waters.  The U.S. loggerhead nesting population is one of the two largest loggerhead populations in the world. Hatchlings from this population traverse the Atlantic to reside in Eastern Atlantic waters including the Western Mediterranean where they spend 5-11 years before return to the Western Atlantic as large juveniles where they complete their growth to adults and join the breeding population.  This complex life cycle therefore necessitates the collaboration of countries on both sides of the Atlantic as well as fisheries interacting with loggerheads throughout the North Atlantic. The trip is an effort to thank fishermen for their efforts to reduce sea turtle bycatch in longline fishing gear by switching to deep sets and using mackerel bait. This will also provide an opportunity to link resources, such as sea turtles, between the US East Coast and the Mediterranean, and to support positive momentum in the Spanish longlining fleet.

Interestingly, coinciding with this trip, one of the loggerhead turtles tagged by KAI in the Mediterranean in 2012 has recently been caught and retagged by scientists in Florida. “Hermes” was one of the turtles part of a study to better understand the impact of the fishery on the physiology and movements of turtles captured in longlining gear. 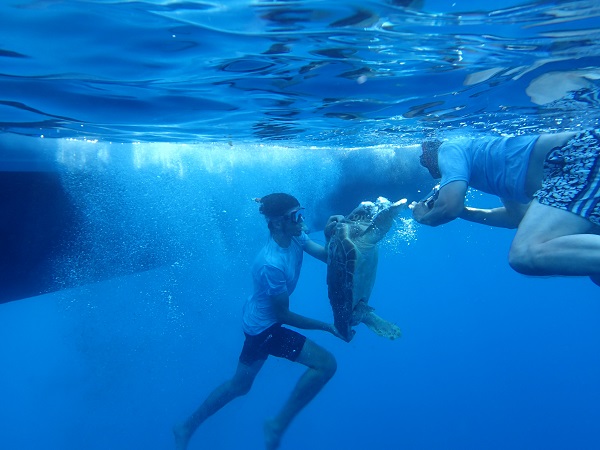 Part of the study was to compare blood biochemistries and movements of turtles that had been caught and released from fishing gear, while a control group would be from turtles that had been free-swimming prior to capture. The collaboration has been ongoing until the present, and includes scientists from NOAA Pacific Islands Fisheries Science Center, Alnitak, Kai Marine Services, Submon, and University of North Carolina Wilmington. Much of the work is accomplished on board the Toftevaag, a Norwegian fishing vessel retrofitted as a platform for sea turtle and marine mammal research in the Mediterranean Sea, and skippered by Kai Marine Service’s Ricardo Sagarminaga van Buiten.

On July 19, 2012, a loggerhead turtle was spotted on the surface of the water and brought on board the Toftevaag by Ricardo and crew. A satellite transmitter (Wildlife Computers™ #96204) was affixed to the carapace using epoxy and body measurements were taken. The turtle, named "Hermes”, measured 74 cm curved carapace length (CCL) and was released at the same day at location ~ 37.506 N, -0.300 W. Based upon satellite data communication from CLS America, and relayed through the Sea Turtle Analysis Tracking Tool (STAT), we confirmed location data for Hermes for 89 days after its initial release. The last transmission received was on October 16, 2012.

Five hundred and sixty five days later, on April 29, 2014, Hermes was entrained into the Florida Power & Light St. Lucie Nuclear Power Plant intake canal in St. Lucie County, Florida (27.345074, -80.237565). Biologists with Inwater Research Group retrieved Hermes after it had made the journey across the Atlantic and into the power plant’s intake canal.

The St. Lucie power plant commonly entrains sea turtles that frequent the nearby reefs and nesting beaches adjacent to the plant’s intake canal. Biologists working for Inwater Research Group (IRG) are responsible for removing turtles from the canal, assessing their health, taking morphometrics, and tagging these animals before safely releasing them. Since 1976, the project has captured nearly 16,000 sea turtles.

Upon capture at the intake canal, Hermes appeared healthy and measured 78.6 CCL, suggesting a growth of ~ 2.6 cm in a 21 month period. New flippers tags and a PIT were applied and the turtle was released back into the ocean.

Loggerheads in the same size class as Hermes are commonly captured at the power plant throughout the year. They are frequently sighted by divers and fisherman in the coastal waters of Florida and are the most common species in the region.  Many of these loggerheads will migrate seasonally along the Atlantic seaboard of the U.S. from as far north as Massachusetts, south to the Florida Keys and northern Caribbean. As hatchlings, loggerheads leave the beaches of Florida and enter the North Atlantic gyre following the Gulf Stream up the Atlantic coast of the U.S., across the Labrador current and then south along the coast of Europe. They’ll spend many years and cross many miles of ocean in this pelagic environment until eventually migrating to shallower coastal waters that provide benthic developmental habitat where most will stay until they reach maturity. Previous tracks suggest of other turtles that left the Mediterranean Sea suggest that loggerheads spend several months in a neritic phase, feeding on the shelf on the east side of Gibraltar. Hermes is unique because this is the first record of a turtle coming from the Mediterranean Sea and making the transatlantic crossing before being captured in Florida. This represents the longest migration of a sea turtle captured at the power plant’s intake canal.

Hermes, if a female, with a straight carapace length (SCL) of 72.5 cm might be a bit small to be nesting on a Florida beach because loggerheads of this size class are rarely reproductively active. However, according to University of Central Florida (UCF) assistant professor Dr. Kate Mansfield there are records of females as small as 69.0 cm SCL nesting on beaches in this region. Kate and her team at UCF’s Marine Turtle Research Group will look for Hermes as they monitor nesting activity at the Archie Carr National Wildlife Refuge this summer.

As for Hermes’s transatlantic crossing, at a minimum, the distance represents a track of 7130 km (Figure 4) over the course of 18 months. It will be interesting to further explore Hermes’ movements in the context of Atlantic Ocean current patterns and assumed turtle migratory routes. (Figure 5) This will help generate hypotheses on the likely route and timing on Hermes’ voyage.