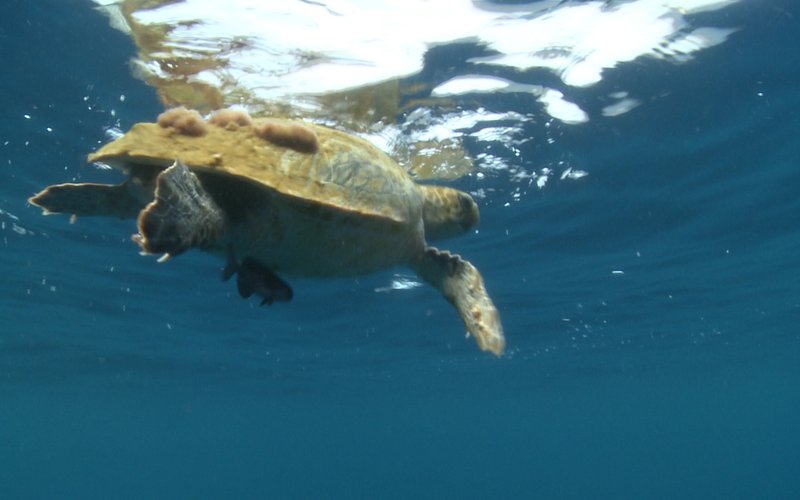 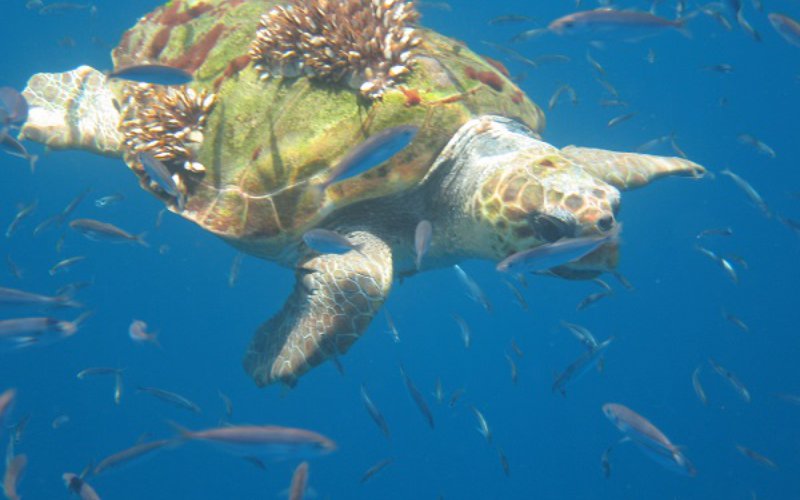 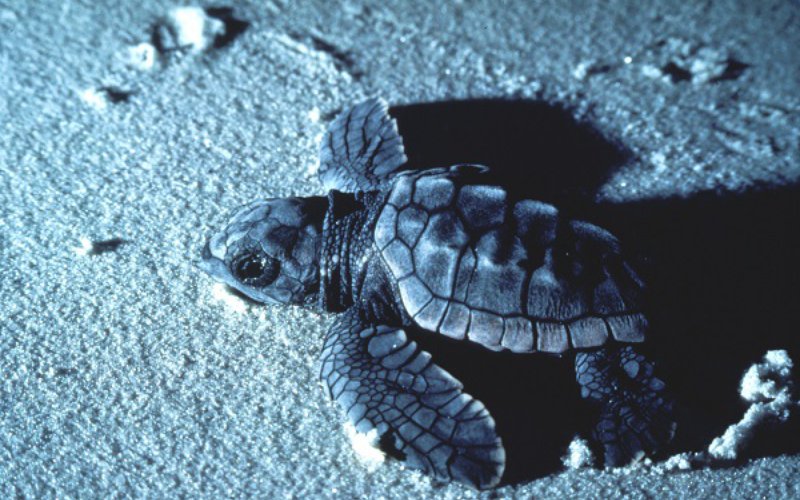 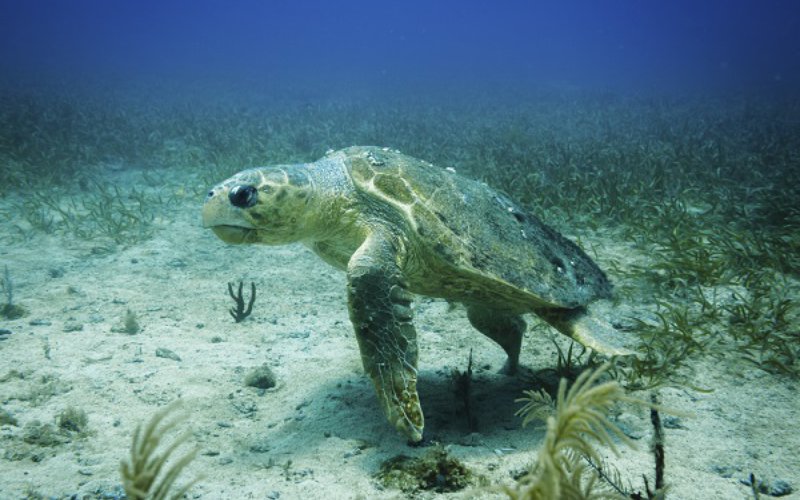 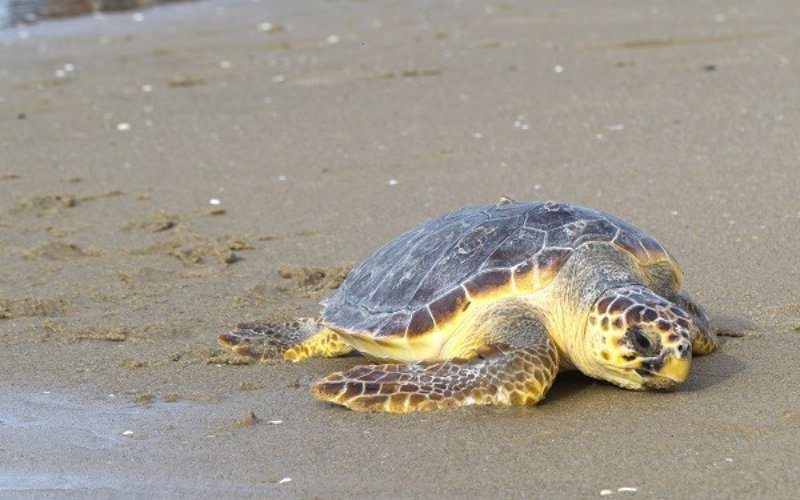 The loggerhead turtle is one of the seven species of marine turtle present in the World’s Oceans, and the most common species found around Spain, Canary Islands and Balearic Islands (see http://nmfs.noaa.gov/pr/species/turtles/). These loggerhead turtles travelling in front of our coastline are from three different population segments, originating from the Mediterranean, the Southern Atlantic and the Northwest Atlantic nesting beaches. The latter population segment is the most common in our waters. Hatchlings born on the beaches of the east coast of the USA and other Caribbean beaches swim like crazy out to sea where they will be absorbed by the ocean currents for the first years of their life.  This is the oceanic phase of loggerhead turtles, just passively migrating with the current, ending up with sargassum, driftwood, and all sorts of species of the open ocean ecosystem from the zooplancton to the greatest whales (see http://oceanservice.noaa.gov/facts/sargassosea.html).

After a two month incubation under the tropical sun, hatchlings rise from their nest and race to the sea trying to escape from birds, crabs, and many other predators on the beach.

After the initial frenzy to get out to the open sea, the hatchlings can relax and drift passively. In a perfect world the currents will take them to gyres, fronts and other oceanic features where they will aggregate together with their prey, and also predators.

This oceanic stage covers several years of the juvenile period of turtles. Around the Canary Islands and the Balearic Islands these turtles find an extraordinary foraging habitat to which they contribute formin a small “oasis” of biomass aggregation in the middle of the open ocean “Serengeti”.

As turtles grow to become sub adults, their habits change. In the Mediterranean turtles of 50 to 60 Kg now alter their oceanic phase with incursions into a neritic phase, feeding mainly on crustaceans and other invertebrates of sea mounds and canyons as those of Alboran or the Mazarron Escarpment.

Migrating to the reproduction grounds

After a few years, sub adults migrate back across the Atlantic on a magnetic course to their reproductive grounds. Reaching sexual maturity around 15 years, females initiate 2 to 3 year nesting cycles when they crawl back up on the beach to lay their eggs in nests carved in the sand. 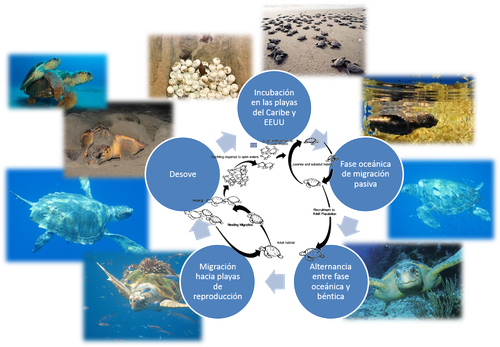 After over three decades of intense conservation efforts to protect sea turtles on their nesting grounds, we have learned that this is not enough if many of the risks that these animals face occur during their offshore stages.

Ingestion of plastics, oils and toxic waste, or entanglement in ropes, plastics and discarded nets are major risks to sea turtles and other marine species (see plastiki.com and 5gyres.org). During this phase turtles may also be caught accidentally (bycatch) in long-lining hooks set in shallow waters.

Turtles in this stage have a more active diving behavior, and this exposes them to the risk of bycatch in deep set long-lines, bottom trawling or in fixed nets. The added risk here is that turtles may drown if they cannot reach the surface to breathe.

Another threat to turtles is that of collision with sailing vessels, an in particular fast-ferris and speed boats. 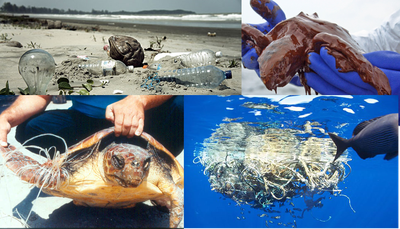 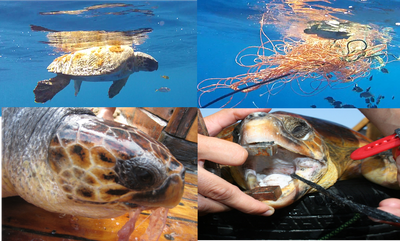 Studying the movements, behavior and sensory biology of sea turtles, and working together with mariners and fishermen can allow us to develop solutions to these problems that sea turtles face. Adapting fishing gear with new technologies, identifying areas of high risk and other measures need to be developed to ensure the future of sea turtles and marine ecosystems.